II. The Construction of Christian Identities 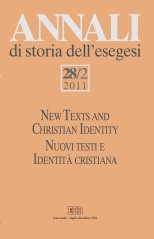 Daniele Tripaldi, Apocalisse di Gabriele: introduzione e traduzione (pp. 11-21)
Since its first edition in 2007, the so-called Apocalypse of Gabriel inscription has never ceased to raise the interest of scholars and media. Beyond any sensationalism and arbitrary interpretation, it might indeed give fresh insights on the complexity of the religious practice, ideology and literary production of Jewish groups at the turn of the Common Era. However, its authenticity is still to be definitely proved. This uncertainty prevents one from drawing solid and deep-ranging conclusions. An Italian translation of the text is presented.

Claudio Gianotto, Il Vangelo del Salvatore copto: introduzione e traduzione (pp. 23-37)
The Gospel of the Savior is a recently published apochryphal text written in Coptic which enriches our knowledge of the multifaceted and complex reality of the first centuries of Christianity. This article presents a first Italian translation preceded by an introduction which illustrates the state of the research on this text.

II. The Construction of Christian Identities

Hagit Amirav, The Christian Appropriation of the Jewish Scriptures: Allegory, Pauline Exegesis, and the Negotiation of Religious Identities (pp. 39-55)
This paper outlines the main research questions and hypotheses which are the subjects of an ongoing European Research Council project (2008-2014), conducted by the author at VU University Amsterdam. The main question at issue is how the process of the appropriation of the Old Testament by early Christian exegetes contributed to the formation of distinctive Christian identities within the multicultural society of the late Roman principate and early Byzantine rule. In the author’s view, the traditional understanding of the distinctions between the two ancient exegetical schools in Alexandria and Antioch needs to be broadened and corrected by a picture of the actual practice of their hermeneutics. The main hypothesis currently under investigation is related to the central role played by the letters of the apostle Paul in the Antiochene reaction against Alexandria.

Brian C. Dennert, Constructing Righteousness: The «Better Righteousness» of Matthew as Part of the Development of a Christian Identity (pp. 57-80)
This study proposes that Matthew’s discussion of a righteousness that «exceeds that of the scribes and Pharisees» is an attempt to distinguish and separate his community from the Pharisees, a group that would include Jesus-followers. While scholars have often viewed the antagonism between Jesus and the Pharisees in Matthew as a polemic against rising Formative Judaism, the use of the Pharisees as the advocates of another righteousness may indicate the influence of Pharisees among the Jesus-following Jews of Matthew’s community. Matthew points out the destructiveness of the teaching of the Pharisees and constructs a form of righteousness based on the person of Jesus as the true interpreter of the Law and the Prophets. In the process of dissociating his group from the Pharisees, Matthew develops a number of key ideas that would later become characteristic of “mainstream” Christianity, thus laying the foundation for the construction of a Christian identity distinct from Judaism.

Teresa J. Calpino, «The Lord Opened Her Heart»: Boundary Crossing in Acts 16,13-15 (pp. 81-91)
This paper focuses on the episode in Acts 16,13-15 that narrates Lydia’s encounter with Paul. Paul does not approach the leading citizens of Philippi, nor even the leading Jews in the synagogue, instead he goes outside the boundaries of the city and speaks directly to a group of women comprised of God-worshippers (sebomenē ton theon). According to societal standards, Lydia may begin the narrative represented as the other, but she ends it as a baptized member of the Philippian community. This paper will examine the story and Lydia’s identity from three angles: Lydia as ideal woman over against dominant societal standards, worshipper of God, and insider. Through her characterization and the virtues awarded to her, Lydia is portrayed as an ideal follower of the risen Christ. Lydia’s characterization suggests that in most cases Acts constructs a female identity that is tangential to the ideal of wife and mother of the dominant culture.

Gabriella Gelardini, The Contest for a Royal Title: Herod versus Jesus in the Gospel according to Mark (6,14-29; 15,6-15) (pp. 93-106)
Titles of honor, nobility, and office, or academic titles confer prestige and power upon individuals, thus potentially bearing a great deal of political as well as social conflict. In the Gospel according to Mark a story of a conflict-laden contest for a royal title is narrated, whose protagonists are Herod Antipas and Jesus. This article first considers linguistic renditions of title and name, of political achievements and failures, and of Herod’s demise. Secondly, it juxtaposes these issues in regard to Jesus and thereby demonstrates – particularly based on Mark 6,14-29 and 15,6-15 – that the narrative construes Herod unpredictably as the kingmaker of the Messiah.

Emiliano Rubens Urciuoli, Confini, apparati ideologici e giochi di potere. In riferimento alla «storia sociale delle idee come fatti materiali» di Daniel Boyarin (pp. 107-138)
How to write a «social history of ideas as material facts» without falling into teleologism and historical anachronism? How to conceive and narrate the history of discursive initiation and social constitution of two mutually exclusive religious systems, without providing any depoliticized social actor with magical powers of interpellation? This article would like to restart the debate on Daniel Boyarin’s controversial reading to the question of the «partition of the ways» between Christianity and Judaism (how did it happen that two former nonreligions were borne to a new social existence as religions by certain linguistic acts?) and try to articulate a methodological proposal for a different answer. In order to do so, a new role is assigned to the main inspirers of Boyarin’s Border Lines: L. Althusser, J. Butler, H.K. Bhabha, J.C. Scott and M. Foucault – with the “extraordinary participation” of F. Barth. 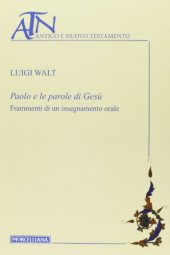